Choctaw Defense Manufacturing LLC (Choctaw Defense) is a manufacturing facility owned and operated by the Choctaw Nation of Oklahoma. Choctaw Defense started out as a finishing company building components for the Department Of Defense (DOD) over 20 years ago. They still provide those original units today, plus numerous other products that end up in the hands of the DOD. The majority of Choctaw Defense's DOD business is "build to print" where they bid on a contract to build an existing product currently in production for the DOD. Since those early days, Choctaw Defense has grown to become one of the largest Native American owned DOD contractors in the US. They are a designated Prime Contractor for three self-designed/fabricated products for the US Army, Navy, and Marines.

Shea Pilgreen is the Engineering Manager for Choctaw Defense. It’s his responsibility to review all contracts and technical documentation for a project and coordinate with production to outline a schedule with major project milestones. Shea then works with production to provide manufacturing and Industrial engineering support for LEAN implementation and the design of jigs and fixtures. 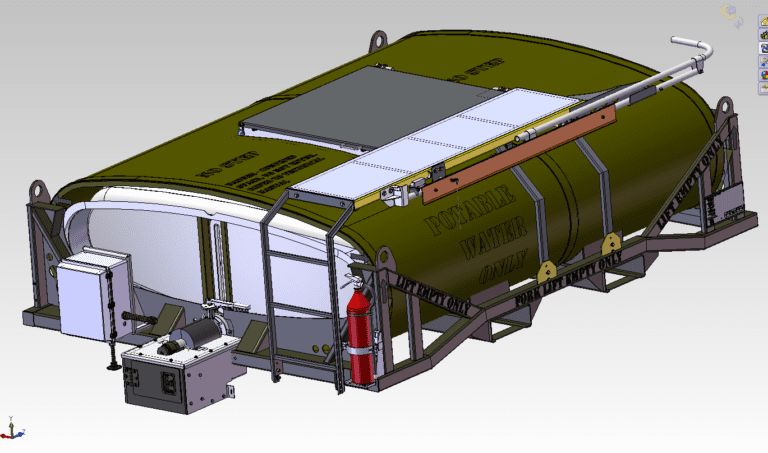 Shea also works with the quoting/proposal department to provide conceptual designs for new projects. Recently, Shea designed and oversaw the building and testing of a new product for the US Army and will manage the design for numerous other projects currently under review by the DOD.

Shea oversees a team of six highly talented Engineers, Designers, and Technicians to accomplish everything on their project docket.

Data management has always been an issue with a team of 5 or 6 people, so Choctaw Defense adopted one of the early available Product Data Management (PDM) systems.

When working with outside contractors, Shea and his team would either need to be on-site with them or work with their internal IT department to allow the team remote access to their workstations. This last option is no longer available due to stricter IT protocol. Shea noted, "We were beginning a new product design that included collaboration with subcontractors. Knowing the time limitations, I had to develop a way to collaborate on the design simultaneously, and our existing system would not allow for that."

Due to internal restructuring, Choctaw Defense had to wait longer than anticipated to implement some key long-term and much-needed IT upgrades. There was an internal push to move the entire company to the Cloud, so upgrading their previous data vault to a SOLIDWORKS PDM Standard vault and moving it to the Cloud simultaneously made sense financially, all while meeting company mandates. The fact that the PDM in the Cloud directly impacted the success of their current collaborative project was the icing on the cake. Pilgreen went on to say, "The fact that this solution was Cloud-Based was the lynchpin from our perspective."

Choctaw Defense needed a system that had a more robust user interface that allowed easier access to the renaming and relocating files for their data management workflow. PDM Standard checked that box, and the Cloud enabled their team to utilize this PDM vault from anywhere.

The only criteria Choctaw Defense had to consider before moving to a Cloud-hosted vault was whether or not it met all DOD compliances. EpiGrid's Cloud-hosted Axis Vaults meet all necessary DOD compliance regulations, plus many more.

The most obvious benefit from Choctaw's adoption of an EpiGrid Cloud-hosted Vault is the ability to enable offsite collaboration. Shea was able to work with multiple design teams in three different time zones simultaneously, all while keeping the data management portion of the project crystal clear. Shea explains this benefit, "The most important part to me as a manager is that my team appreciates how it helps make their lives easier. It took quite a while to fully understand the PDM Local View and how the user interacts with the Vault. Once we educated everyone on the best practices for SOLIDWORKS PDM as a Service, it proved to be a much better solution than what we had before."

Coming from a legacy PDM software, Shea admitted the learning curve was steeper than expected, especially since he was taking on the CAD Admin role for Choctaw Defense. With the help of the Converge team, the kinks worked out, and Shea and his team are fully utilizing the Cloud-hosted Vault on all projects. "Having full access to the CAD models (mine or my subcontractors) has been a game-changer. I have been at my daughter's dance competitions and was able to throw up a hot spot from my cell phone and work on the project as if I was in the office. 24/7 accessibility was extremely important to me as the Project Engineer/Manager," said Pilgreen.

The second important item to Choctaw Defense was security. Shea provided each team member access to their portions of the project without being concerned that the teams saved the files to the wrong location. And, of course, all compliance criteria imposed by the DOD were met by this Cloud solution.

Without having a long history of projects completed in the new file management system, the only gauge Choctaw has is this one major project. But, based on the success of this one project, Shea's whole team is excited to realize the time savings and reduced headaches this solution provides. Of course, the designers did their part to create a highly successful design. However, Shea relays that he was told numerous times by other coworkers how well the design came out compared to previous projects, partly due to their new ability to collaborate seamlessly with their outside contractors.

Ready To Start Your Journey Toward Managing SOLIDWORKS in the Cloud?

SPEAK WITH A CAD EXPERT

We bridge the gap between Engineering and IT teams helping you make the right choice for managing CAD in the Cloud efficiently while taking the ongoing burden off your IT department to manage the applications.